All  information provided on this page by: Doug Lofgren

The Truth About Injectors; Injector Flow Bench
Once again, an old truth rears its ugly head; ‘if you don’t want to know the truth, you shouldn’t ask the question! The fuel injector test bench is one of those testing devices, like the dynamometer, that will produce results that make your life more difficult.

The injector test bench I’m familiar with is the ASNU but there are others.
This particular device has an ultra-sonic bath for cleaning the business end of injectors and a pump and fixtures to test the flow rate of the injectors at a variety of different duty cycles and pulse rates. The pulse rates are represented as RPM but I would think that 5000 RPM would be 2500 pulses per minute. And, it is.

Another parameter that is checked when testing fuel injectors is the spray pattern. Fuel Injectors are supplied with a variety of spray patterns for different results. There are multi-hole tips that produce a wide pattern and single-hole types that produce a pencil thin stream.

The quality of the spray pattern is determined subjectively by visual inspection, while the flow rates can be determined objectively by measuring the flow in graduated cylinders. The ASNU offers the ability to test the injector flow using a test that runs through about 10 different pulse rates and duty cycles. This basic test takes 30 seconds, 3 seconds per cycle but it can be run at any of the cycles from 5 seconds to 30 seconds adjustable in 5 second intervals. Here comes the important part.

The earlier versions of the ASNU would only support the tests at different pulse rates and the several duty cycles. The latest version supports a ‘full flow’ or 100% duty cycle test and it has a calculator that is used to determine the maximum rated flow of an injector.

Several years ago, I worked at a shop that had the older version of the ASNU and every time I checked injectors there seemed to be a significant mis-match in their flow rates.

This result made me wonder why I never saw a pair of injectors that weren’t within a few percent of one another. It also made me wonder how a manufacturer could sell a product that varied so much.

This is the result of a test of 6 Weber IWP069 (yellow band) injectors at some combination of pulse width and cycles that represents the range in which they normally operate (so kill me, I didn’t take good notes.) But, it’s typical of the kind of results I usually see.

One answer was that all of the bad injectors sold to Ducati and Harley-Davidson were shipped to Minnesota.

I may not be a good person, but I doubt that Ducati or Harley-Davidson know that. Maybe I‘m just not paranoid enough?

If the answer isn’t that the motorcycle manufacturers have sought me out to be the recipient of their rejects, what it the answer?

In all of the flow tests that I performed using the older version of the ASNU I could only test with the injectors pulsing, which is the mode in which that they are expected to operate. When I finally ran a test at full flow or ‘Static Flow’ I realized how the injector manufacturers could offer their injectors with anything like a quality standard that I had previously not seen.

I was testing 6- IWP162 Weber Pico injectors from H-D Delphi systems trying to find matched pairs when I decided to try the new ‘Static Flow’ test to determine the flow rates.

Since then I have found the same result with every type of injector I’ve tested. I’ve tested the side-feed injectors from Magneti-Marelli H-Ds and Ducati 748-916-996 and they follow the same patterns. They have quite a bit of variation when they are cycled but they are very close when tested at full flow. 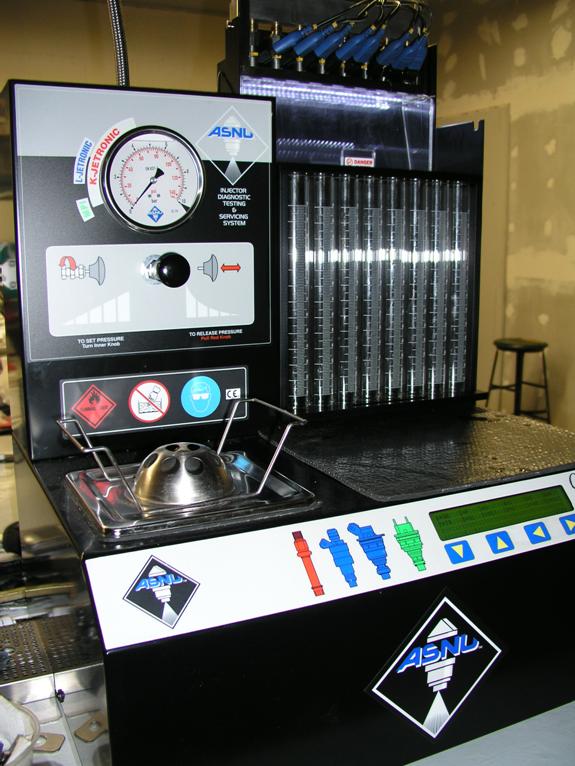 This is the ASNU injector test bench. The ultra-sonic cleaner is beneath the stainless steel cover on the left, the graduated cylinders are used to measure the flow. 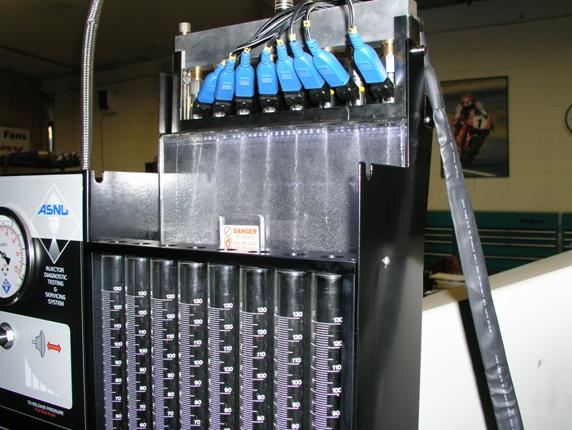 This shows the spray pattern test. There are extra points for anyone who can identify the rider and bike in the photo in the background. 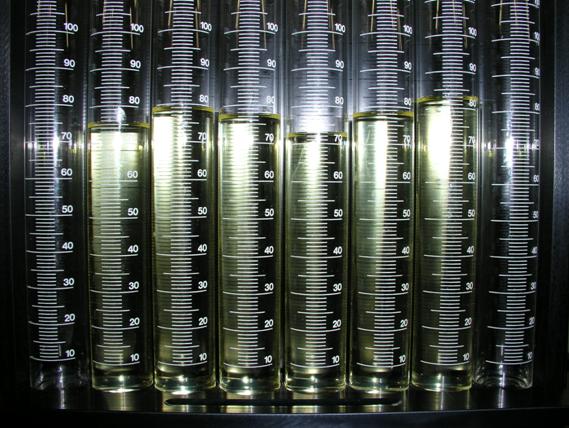 Here is what, from my experience, is typical for a test of 6 injectors tested at one pulse width and some frequency that relates to the operating range of our engines. 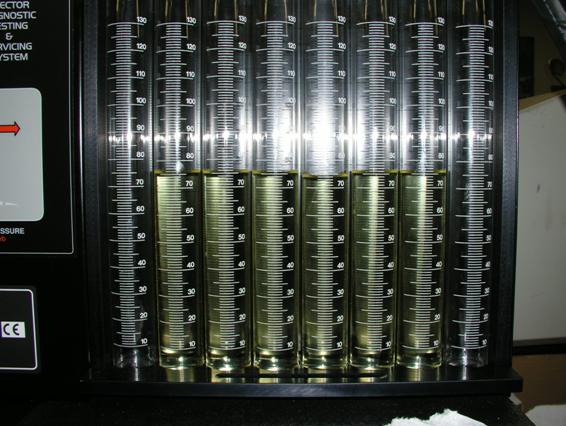 This is a ‘Static Flow’ test of 6 Weber IWP069 injectors. This is the test that allows the injector manufacturer to offer a quality standard of plus-or-minus 1.5% at maximum rated flow.

This is the graphic representation of a static-flow test of 8 – IWP069 Weber Pico injectors. I just added one to the left and one to the right from the test of 6 injectors from the previous photo. I decided to do a fairly complete test of 8 of these IWP069 injectors, so I tried to use a combination of pulse width, cycles-per-minute, and time that would give comparable flow volumes (so they could be compared directly.)

Then I averaged the values of each of the 6 tests and calculated the percent variation from that average.  With this information I can represent the results as flow volume comparisons for each test, or percentage variation for the same tests.  First the test results;

The different flow volumes resulted from different test times at different pulse widths and cycle rates. This isn’t the best way to show the results.You might notice that the greatest variation occurs at higher cycle rates (RPMs) that would be good news for the H-D guys, not so good for the 999 Ducati guys.

Finally, I decided to graph the results by the percentage variation from the average and that graph looks like this; 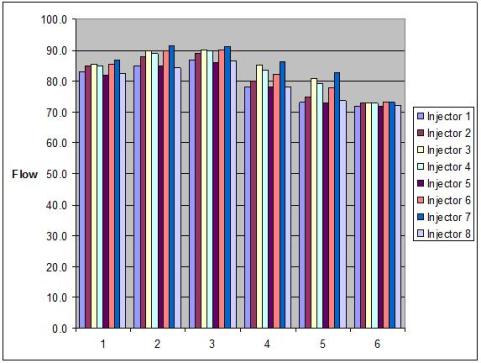 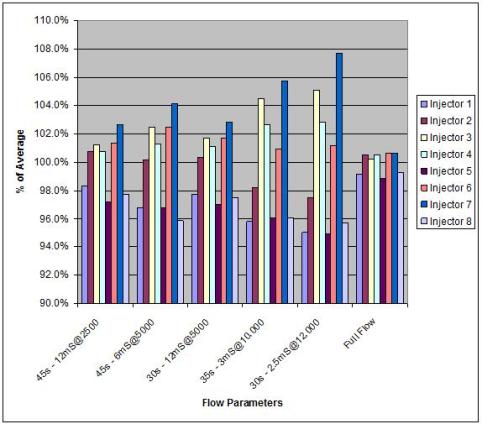 The static flow results have to be the type of test that allows a manufacturer to claim any product consistency whatsoever. Since we know we’re not supposed to run injectors beyond 80% duty cycle (actually you can probably run closer to 90% on engines that operate under 6000RPM) the static flow test has no relevance other than determining what size injectors any application requires.

Anyone who has been involved with fuel injection tuning has seen case after case where some ‘canned’ map hasn’t been able to produce the good results that a custom calibration will produce.

The results of this testing would be the answer to the question ‘why don’t ‘canned’ maps make every bike run right?

It has been pointed out to me that some companies sell ‘matched injectors’ that are matched at full flow. If the results of this test are typical or even believable, matching injector flow rates at static flow conditions doesn’t begin to address the issues.

Marren Fuel Injection has been offering matched injectors that are 0% variation at full flow and plus-and-minus 2% at a controlled pulse rate. Clearly‘get it.

The last question is; do the vehicle manufacturers who have these things certified, and the EPA, understand this and do they realize it is a problem?

If they do, do they enter the certification process with matched, nominal injectors and rated fuel pressure regulators?

If the answer is ‘no they weren’t submitted with matched, nominal injectors’, then, none of the vehicles produced (until the manufacturer has introduced closed loop systems) have managed to meet the certified emissions standards except the vehicle that were submitted.

If the answer is ‘yes they were submitted with matched, nominal injectors’, the same thing holds true except there is a slightly greater chance that some vehicles have met the standards.

I’ve been told by someone ‘in the know’ that the manufacturers do use matched injectors to create the calibrations they submit for certification.

As the EPA and CARB are cracking down on older vehicles that don’t meet emissions standards in place at the time of manufacture, they should be aware that these variables involved with any non-closed-loop system mean that the majority of these older vehicles, modified or not, have never met the standards that were in place, and it is their lack of testing that has kept them un-aware of these facts.

There are more frustrating events in our lives, but when you’re half-way through tuning someone’s fuel injected motorcycle (or your own) and discover that the injectors are too small, that moment can be pretty frustrating.

A little planning can eliminate that set-back from the list of ‘Most-Likely-to-Occur’ events.

There are plenty of injector sizing spreadsheets on the internet, RC Engineering being one that ‘jumps out’ at the moment, but most are meant for automotive engines that are tested at the crankshaft.

Motorcycles are usually tested at the rear wheel so there are a few more losses along the way. The spreadsheet that I use takes those losses into consideration so we can input the rear wheel Power and get a reasonable picture of the injector size we need to get the job done.

This spreadsheet assumes a BSFC (Brake Specific Fuel Consumption) of 0.5 Lb/HP/hour. It also assumes that we want to keep the injector duty cycle below 80% (a commonly accepted target.)

Finally, most injectors are rated at Static Flow (WOT, no pulsing) at 3 Bar fuel pressure so you’ll have to input your specified fuel pressure.

The results are given in flow ratings at 3 Bar so you can reference them to a manufacturer’s specification. 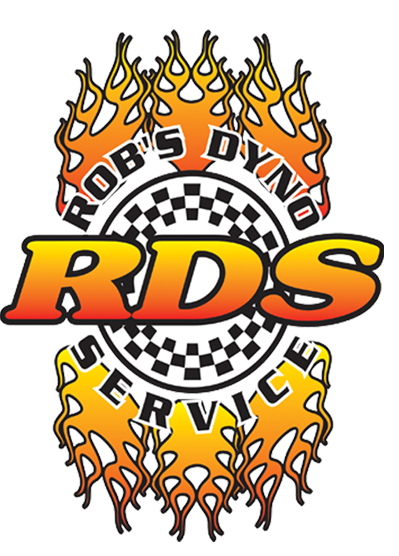